Nothing excites Frontier PR more than to work with a new disruptive green technology that challenges conventional thinking or practices – and no company fired that excitement more than cleantech pioneers Pavegen Systems. 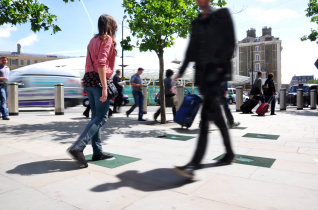 London-based Pavegen is the brains behind a unique technology that harvests renewable energy from footsteps via specially manufactured paving tiles.  Can you imagine: your walk to work in the morning could generate the electricity that helps power the street lights as you wander home that night?

Working with an innovative start-up like Pavegen, and its new and unique product, presents a special PR challenge.  You’re not just selling – you’re raising awareness of an entirely new approach.

Unsurprisingly the media were interested to know more about a potentially game-changing technology, but Frontier PR recognised that the key to delivering value to Pavegen was to ensure that the market could interpret ‘novelty’ into value – both commercial and social.

Frontier PR’s starting point was to clearly establish how differing vertical markets could benefit from Pavegen.  Construction, sport, transport, retail and education were all identified as relevant, but each market needed to understand how and why Pavegen presented a unique value proposition.

The results were breath-taking: using high-profile installations at sites such as the Paris Marathon, London 2012 and World Economic Forum at Davos – Frontier PR secured millions of pounds worth of media profile.

Highlights included securing a news piece on the home page of CNN.com (generating 14,000 Facebook likes in a day), numerous features on the BBC (including Radio 4’s costing the earth programme), a full feature on Guardian Environment and even Channel 4’s Sunday Brunch!

Pavegen’s CEO Laurence Kemball-Cook said: “Frontier PR worked hard to maximise Pavegen’s media profile, and the results were very impressive. The national and international print, broadcast and digital coverage they generated exposed Pavegen to well over 50 million views worldwide – including the likes of the BBC, USA Today, Die Welt, ThomsonReuters, The Guardian and The Telegraph.”