The ambitious landlord, which owns 14,600 properties, was looking to raise its profile within the social housing sector, and establish itself as an industry leader in key delivery areas such as health and housing and welfare reform while also promoting its role as a developer within the North West. 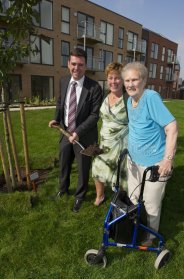 In 2014 Frontier PR managed to secure almost 100 pieces of coverage in key trade and national media outlets, with features, news stories and comment articles appearing in the likes of Inside Housing, 24 Housing, The Guardian Housing Network, Social Housing Magazine and on Radio 4.

Members of the City West senior team also made contributions to the National Housing Federation and the Chartered Institute of Housing blogs.

City West has been a long-time champion of greater links between health and housing services in England, and was keen to start a national debate on how best to improve ties between the two sectors.

The campaign has brought City West’s message to the centre of the health and housing debate, with senior staff invited to speak at all major industry events on the issue.

Sally Battye, Head of Marketing & Communications at City West Housing Trust sad: “Frontier Public Relations is a valuable addition to City West’s PR team, providing consistent and regular support, as well as helping to plug any gaps at peak times and holidays, even coming in to work within the team.

"They are fantastic to work with - professional, creative and most of all they have an excellent understanding of the social housing sector.”