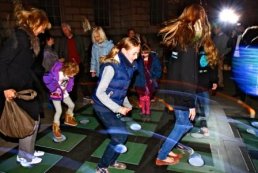 Pavegen slabs, which convert the energy from human footsteps into electricity, were installed within a staging area at Somerset House in Central London.   The energy generated from dancing guests was used to power a number of applications including a large visual of the World, signifying what can be achieved through collective participation.

The 16-slab Pavegen platform at Somerset House was the largest energy-generating installation ever created by the London-based Cleantech firm.  Another large installation at Westfield Stratford City Shopping Centre, neighbouring the London 2012 Olympic Village, is planned to go live in the coming months.

WWF’s Earth Hour started as a simple idea that became a global phenomenon, with hundreds of millions of people worldwide turning off their lights at the same time, to demonstrate their aspirations for a brighter future.  2012’s Earth Hour was the biggest to date, spanning a record-breaking 150 countries.

Pavegen’s CEO and founder, Laurence Kemball-Cook, was delighted to assist WWF UK with their celebrations:  “We were delighted that Pavegen could play such a large role in Earth Hour 2012.  This kind of global event is the perfect place for Pavegen to get people thinking about the impact of energy use on a worldwide scale.

“At Pavegen, we see energy generation coming from a variety of untapped sources in the future, including of course, people power.  Together, and with a shared ambition, we can achieve so much more.”

The WWF event also featured UK dance crew ‘Flawless’ and live music from street band ‘The Luminites’, before invited guests took to the Pavegen stage, powering tweets across the world in carbon-friendly fashion.

Rachel Bloodworth, Senior Communications Manager at WWF-UK was delighted with the event:  “The installation was an invaluable part of the celebration.  We were particularly excited by the way of engaging social media with their technology.”

Pavegen’s CEO and founder, Laurence Kemball-Cook, has recently been asked to speak at the TED sustainability summit in Rio de Janeiro, from 10th – 12th June 2012, following an invitation from the United Nations.