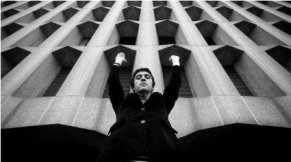 Music icon Johnny chose the location for its modernist style of architecture that fits effortlessly with the lyrical themes of the single; an autobiographical account of his leaving school aged fifteen to pursue life as a musician. Hexagon Tower is amongst a number of Mancunian landmarks to feature in the video shoot.

The video, which is based on situationist philosophy, was directed by Manchester based filmmaker David Barnes.

Whilst at the Manchester Science Park, Johnny and his team used exterior shots of the building as well as visiting the laboratory of one of Hexagon Tower’s tenants, Lubrizol.

Stewart Needham, Facilities Manager at Hexagon Tower, said: “We were absolutely thrilled – especially our tenant manager who is a huge fan – that Johnny decided he wanted to feature Hexagon Tower in his new video.

“It is fantastic that Johnny chose to recognise our science park in a compilation of Manchester landmarks, we’re all waiting with bated breath to see the video!”