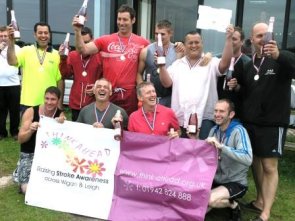 An exciting day of Dragon Boat Racing at Pennington Flash ended in victory for the ‘Puma Pirates’ from Business Network International’s (BNI) Leigh Chapter, as five local businesses battled it out to raise vital funds for local charity Think Ahead Stroke Group.

The BNI team narrowly defeated ‘Team GK’ from local solicitors Greenhalgh Kerr in a nail-biting final race, following a series of closely-fought battles throughout the day.

Other competing teams included ‘Puff the Magic Dragons’ from ASDA’s Wigan Distribution Centre and ‘Lymedale Warriors’ from the supermarket chain’s Newcastle-under-Lyme branch.  The ASDA stores have built a strong relationship with Think Ahead, competing in both Dragon Boat Challenges and even donating food for this year’s event.

Think Ahead Stroke Group has been improving life for Stroke Survivors, their families and carers across the Wigan borough since the year 2000, through their unique and long term ‘Living With Stroke’ programme.  The charity provides a range of suitable social and educational activities for members, with a focus on sharing experiences of Stroke through their own Peer Support scheme.

Gary Ward, Director of Leigh’s BNI chapter and team drummer said: “It feels great to be the winners, we’ve all really enjoyed it!

“It’s fantastic for local businesses to come together and support a local cause.  We’ll definitely be back next year to defend our title.”

Carol Sankey, Executive Manager at Think Ahead Stroke Group, said: “We’re delighted to have received such support from businesses in the local area.  It was a really fun afternoon for everyone but congratulations to the winners from the BNI Leigh team.

“This competition is growing every year and we hope that next year’s event is even bigger and better.  Through events like the Dragon Boat Challenge, we’re able to raise awareness of Stroke, which affects approximately 1,000 people every year in the Wigan and Leigh community.”

Local Solicitors Greenhalgh Kerr, who competed in the 2012 Dragon Boat Challenge will be hosting a Charity Supper Quiz in aid of Think Ahead at the DW Stadium in Wigan, on Thursday 25th October.