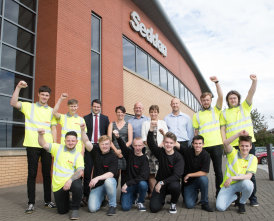 Builder and developer, Seddon, has recruited 13 new trainees, after receiving more than 700 applications for its award-winning apprenticeship programme.

Seddon has also filled two degree-pathway apprenticeship roles – a trainee estimator and quantity surveyor – in conjunction with Salford University. This training route, whereby the learner has the opportunity to progress through a degree in three years as opposed to five, was made available following recent apprenticeship reforms.

All apprentices gain experience both on site and the level 2 trainees undergo classroom learning in partnership with Salford City College.

One of the successful plumbing apprentices, Craig Catley, 22, is joining the programme via the Build Salford traineeship, supported by Salford City College.

Another trainee, a bricklaying apprentice, Morne Bezuidenhout, 20, was successful in their application after completing the Sector Based Work Academy in partnership with Salford College and Farnworth Job Centre – the third Seddon apprentice to do so.

Trainees began the programme on 4th September, starting with a two-week induction, which included health and safety demonstrations and a community event on the 8th September where the group helped out with some landscaping and bulb planting at Maple West, an extra care development recently completed by Seddon for Your Housing Group in Stoke on Trent.

The Seddon level 2 apprenticeship entails two years of study, with some trainees continuing with the company to complete a three and half year course - something unique in the industry.

Of the last year’s new apprentices, eight are progressing from level 2 to level 3 qualifications this time around.

Kat Healey, training manager at Seddon, said: “Seddon nurtures talent from the ground up – it’s in the DNA of the company. We train apprentices not only for ourselves, but for the industry as a whole, meaning the next generation has the right qualifications to suit their needs and meet any challenges head on.

“Our apprenticeship programme gives young people the skills to make lasting, valuable contributions to the built environment, and the right attitudes and professionalism to forge a life-long career in this incredibly diverse industry.

“As apprenticeships are based on matching knowledge with competency, our degree-pathway apprentices now have the opportunity build a portfolio of evidence that goes towards chartered membership, which previously would have taken an additional two years. We are delighted to be able to offer this new pathway, allowing our trainees to grow in confidence and ability at a much faster rate.”