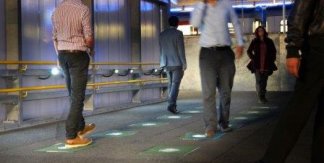 A pioneering walkway leading to the Olympic Park will be lit round-the-clock by the footsteps of a million spectators during the London 2012 Games.

The award-winning British renewable technology has been commissioned by the Olympic Delivery Authority (ODA) to light the temporary bridge leading from West Ham Station - one of the three transport hubs feeding the London 2012 Games – to the Olympic Park.

Twelve energy harvesting floor tiles along a walkway connecting the Station to the Greenway walking route to the Olympic Park,  are expected to receive more than 12 million impressions, generating 72 million joules of energy – enough to power a small electric car for 397 laps of the Olympic athlet

The power will be used to illuminate the walkway for eight hours at full power during the night, and 16 daylight hours at half power. As well as 24-hour lighting, the units will also produce an energy surplus of around thirty five per cent, to be stored as a contingency in batteries onboard the units.

ODA Transport Director, Hugh Sumner said: “The widespread use of energy-efficient technology is one of the main features of London 2012. This foot-powered lighting system for one of the main walkways into the Olympic Park is just one of the many sustainable initiatives the ODA have deployed during the Games and will really get people thinking about how an individual can make a difference, while getting to and from their events.”

David Stubbs, Head of Sustainability at the London Organising Committee (LOCOG) said: “We want people coming to the Games to be able to do their bit for the environment and this is a great example where, literally in a few steps, people can actively contribute towards making these truly sustainable Games.”

-    The contractor for the temporary footbridge was Barhale Construction PLC. The ODA works at West Ham station included building a temporary footbridge spanning the eastbound track of the District & Hammersmith and City Lines, with a temporary walkway taking people to Manor Road. The temporary footbridge and walkway will allow Games-time spectators to get directly from those platforms onto the Greenway walking route towards the Olympic Park, without having to pass through the station itself. The measures will also allow regular commuters and residents to follow their usual route through the station with minimal disruption.  Permanent works to install an improved ramp and stairs up to The Greenway have also take place and will remain in place after the London 2012 Games.

-    Based on an average of six watts per footstep the tiles will generate 20 kilowatt- hours (kWh) or 72 million joules of energy during the Games.

-    During the Games, the energy will be used to power twelve LED spotlights illuminating the length of the walkway at West Ham.

-    When stepped on, the tile surface flexes just 5mm, converting kinetic energy to between five and seven watts over the duration of the footstep (five-seven joules), depending on the force of the impact.

-    The renewable energy can either be used directly for low-power applications like lighting, signage and sound equipment or stored in on-board batteries within the units.

-    The units each contain wireless transmitters able to send information via the web, allowing both spectators and organisers to monitor how much renewable energy is being generated via their computers and smartphones. This information will both reward and inform visitors, but could also enable the operators of this and similar events, to better understand and manage traffic flows.