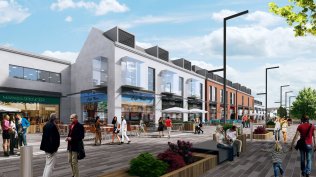 Builder and developer Seddon has been awarded a £7 million retail contract in Birmingham.

The company has been appointed to deliver the 54,000 sq ft Mulberry Walk Retail Park development in Sutton Coldfield by Salmon Harvester Properties Limited, with work expected to begin in November 2015.

Seddon will construct retail accommodation, a service yard, car parking and hard and soft landscaping for 22 units in the Mere Green area of the city as part of the wider £18 million scheme designed by K4 Architects.

Work on the project is expected to be completed by October 2016.

The scheme, which is joint venture between Salmon Harvester Properties Limited and NFU Mutual, has already confirmed Marks and Spencer and Boots as anchor tenants, while space for Prezzo, Café

Nero, Boots Opticians and Loungers is currently under offer. Greene King is already onsite and trading.

Eamonn Burns, Regional Director for the Midlands at Seddon, which has offices in Stoke and Birmingham, said: “The past year has seen Seddon’s presence in the Midlands grow strongly as we build a diverse portfolio of contracts across the business.

“We look forward to delivering this scheme for Salmon Harvester over the next year.”

Seddon recently moved into new offices on Birmingham Business Park and has rapidly expanded its team in the region.

Rorie Henderson, Development Director at Salmon Harvester Properties Limited, said: “I am delighted to have appointed Seddon after a quick and competitive tender process where Seddon outperformed the competition on price and programme.”