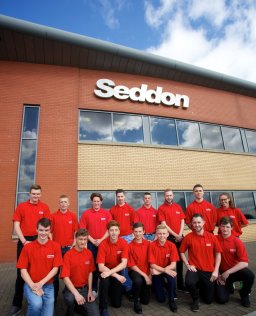 Builder and developer Seddon has welcomed 15 directly employed apprentices to its ranks in the North West.

Builder and developer Seddon has welcomed 15 directly employed apprentices to its ranks in the North West.

This latest intake brings the number of trainees taken on by the company in its 119-year history to a staggering 3,015.

Competition was fierce for the positions, with more than 500 people applying for the posts.

The chosen few will now go on to complete a 3.5 year traineeship with the company, working to NVQ Level 3 standard.

Seddon has a heritage of offering high-quality apprenticeships, many of its directors having started their careers as trainees.

Mark Watson, 23, of Little Hulton in Salford, joins Seddon as a ground working apprentice. He said: “It’s amazing to know that I was chosen out of 500 people to take up this place.

“Seddon has an amazing reputation in the North West, especially in Salford where the company began. My grandad was over the moon when he found out, he knows what an apprenticeship with Seddon might mean for my future.

“I am so excited to get started, the job will give me a reason to get up in the morning and help me provide for my family.”

Joining Mark is Maria Thompson. The 18-year-old has been awarded a painting and decorating apprenticeship.

Maria from Deane in Bolton said: “An apprenticeship with Seddon is not just a job, it’s a career.

“I am really excited for the future, in three years I will be fully qualified and be able to help more women into the industry like Seddon has helped me.”

Over the last 10 years Seddon has employed more than 225 apprentices — with 95 per cent of those trainees staying with the company after the initial three years.

Jonathan Seddon, Managing Director of Seddon, said: “Seddon’s commitment to training the next generation of construction workers is a strong as ever.

“The sector is coming out of a recession and it is our dedication to apprenticeships that has put us ahead of our competitors – allowing us to build our teams and ensure against the skills shortage.

“I started my career on site and many of my fellow directors did the same, it shows that with hard work and determination you can get wherever you want to be.”