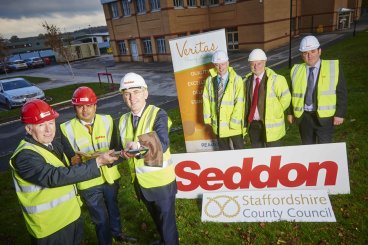 Seddon has been appointed to build a £5.5 million primary school in Stafford as the town prepares for the relocation of more than 450 army families to the area.

The builder and developer, which has offices in both Stoke-on-Trent and Birmingham, was awarded the contract through its place on Staffordshire County Council’s £40 million construction framework.

The Veritas Academy development will see the refurbishment, conversion and extension of the former Staffordshire University Nelson Library, as well as the construction of a new direct access route to the site.

The primary school will cater for 420 pupils and 52 nursery children when it opens in September 2015.

Eamonn Burns, Regional Director for the Midlands from Seddon, said:

“It is exciting to be able to add this flagship project to our ever growing list of recent education schemes for Staffordshire County Council.

“We have significantly increased the amount of work we have secured in the education sector, often as result of local authorities needing to increase the number of primary school places.

“This year alone we have been awarded £30 million of education construction projects.

“Seddon hopes that education as a market, especially in the Midlands where we have been appointed to a number of frameworks, will form a growing part of our workload including that of the ongoing relationship with Staffordshire County Council.”

Veritas Academy is being built in response to growing demand for primary school places in the town, ahead of the move of hundreds of forces families to Beaconside when soldiers transfer from Germany to Stafford next year.

The school has been designed by Entrust, a joint venture company set up between Staffordshire County Council and Capita and will be run by Reach2 Academy Trust.

The scheme involves the refurbishment of the existing library on the site, as well as the construction of a purpose-built, timber-framed nursery.

This is the fifth school Seddon has built through the four-year development framework, which will see the construction of new schools and sports facilities as well as extensions and refurbishments of existing buildings.

“Stafford is growing fast, particularly with the MOD moving a Signal regiment from Germany to Stafford. With this in mind, we have to act now to ensure that children receive the education they deserve. This new school will not only cater for that demand, but will create employment opportunities, as well as providing facilities and lifelong learning opportunities for the wider community.

“The old Nelson Library is ideally located opposite Weston Road School. The fabric of the building is in good condition, meaning that it can be easily modernised and upgraded to provide a purpose-designed school for the children of Stafford.”