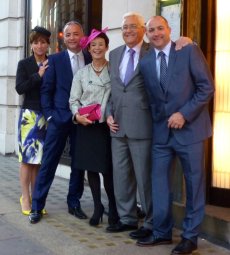 Seddon Director Christopher Seddon has received an MBE for his service to apprenticeships and the community.

The award, presented by HRH Prince William at Buckingham Palace, comes after Christopher was named in the most recent New Year’s Honours list.

Seddon has a proud track record of identifying and developing new talent, and is one of few large, national builders to retain a dedicated apprenticeship and training programme throughout the recent recession.  Seddon has maintained a commitment to training and developing an intake of young people for over 75 years.

In 2013 alone Seddon employed almost 50 full-time apprentices and regularly receives 600 applications for each year’s intake, for a variety of roles – from brick layers and joiners to office support.

Over the last ten years the company has employed more than 225 apprentices – with a 95% retention rate.

Although Seddon has welcomed Chancellor George Osborne’s recent budget ‘blueprint’ to deliver 200,000 new homes nationally, and extend the Government’s Help to Buy equity loan scheme to 2020, it is concerned that the a construction ‘skills gap’ could restrict the delivery of new homes across the UK.

In December 2013 the Construction Industry Training Board (CITB) announced that 42% of construction firms are struggling to recruit workers with the right skills, while a Chartered Institute of Building (CIOB) survey of the same year revealed that 82% of respondents believe a skill shortage exists - a 5% increase since the last survey in 2011.

More tellingly 51% of respondents stated that their businesses were not actively recruiting apprentices. Conversely, 90% of the same people questioned believe apprentices are key in filling the skills gap.

Christopher Seddon said: “I’m obviously very honored and humbled to have received this recognition, and I’d like to take a moment to share it with everyone at Seddon over the years who have contributed to bringing so many young, talented people into the business – and into the construction industry.

“Seddon’s commitment to apprenticeships is in the DNA of the family and the business, and we’re a stronger business because of it.  Although education and colleges have an important role to play, there’s no substitute to getting people onsite and learning the core skills to do a job properly.

“Hopefully my personal recognition can be a timely reminder to everyone in the industry that there’s a skills gap that we must all work to fill, and as a business we will continue to make our contribution whilst also lobbying our peers and Government at a national level.”

Jonathan Seddon, Managing Director of Seddon and Christopher Seddon’s son adds: “As a builder, Seddon is obviously pleased that the Government has extended its commitment to assisting first time buyers purchase new-build homes, which should have a positive impact on demand – plus the welcomed news to support plans for over 200,000 new homes for families.

“However, we are concerned that many in the industry continue to ignore what is an obvious barrier to the supply of new homes, particularly now the country is gearing up to start building again.

“As a family owned business Seddon has been able to make a commitment to apprenticeships and training throughout the recent lean years, and although I appreciate it’s been harder for some of our investor and shareholder owned competitors to justify this expense through the tough times, we all have to pull our weight to ensure we have people with the skills to deliver what’s being promised.

“We can’t just rely on sub-contractors to fill the void.”