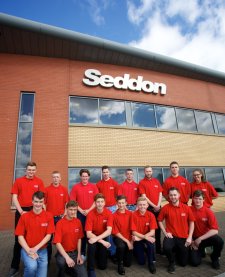 Seddon is inviting people to build skills in the construction industry with events across the North West as it launches its annual apprentice recruitment programme during National Apprenticeship Week.

The builder and developer has taken on apprentices for the past 80 years and employs 57 trainees across the country.

As part of National Apprenticeship Week, which takes place from March 14 – 18, the firm launched its 2016 recruitment drive on March 14, with positions available in painting and decorating, plumbing and engineering at the firm’s sites throughout the North West.

Tony Costello, Head of Training at Seddon, said: “Seddon is committed to training the next generation of construction talent.

“Providing opportunities is in our DNA. Most of the directors began their careers as apprentices.

“We want to show people leaving college or those looking for a new career that a construction apprenticeship will not only give you a skill for life, but brilliant and diverse opportunities.”

Seddon, which has trained 225 apprentices across the past 10 years, regularly receives more than 500 applications for its yearly intake of apprentices.

All its apprentices receive three and a half years training, above the national average of three years, with 95 percent going on to stay with the company after their course has finished.

During National Apprenticeship Week, Seddon will also promote the benefits of apprenticeships and the roles available in the construction industry with two events held in the region.

The firm has teamed up with schools, colleges, employment agencies and organisations across Greater Manchester to inspire people to build a career in construction.

Educators and career advisors joined the Seddon training team at its Bolton offices on Monday, March 14, with the Seddon team demonstrating the benefits of apprenticeships and why they are a viable alternative to university education in developing a career.

On March 15, Seddon will join forces with North West based training provider ProCo to deliver a construction taster at its development on Prescott Street in Wigan.

People attending the event will be able to get stuck in to plastering, brickwork, carpentry and plumbing workshops, and quiz workers from Seddon and the ProCo team on the benefits of seeking an industry apprenticeship.

The firm is hosting a drop in session at Salford City College on Wednesday 16 where students will be able to quiz Seddon staff on opportunities and roles within construction and what they need to do to secure their first job in the industry.

Seddon will also take part in apprenticeship awards held at Tameside College on Monday 14 and Salford City College on Wednesday 17 alongside a meet the employer event for budding apprentices at Future Skills College, Salford on Friday 18.

Tony Costello added: “Our mantra is to ‘train for the industry, not ourselves’. We want to showcase the benefits of working in the industry as a whole, and challenge perceptions that it is a low-pay, low-opportunity career path.

“There is a desperate need for skilled workers, and yet there are 70,000 people on construction courses in colleges across the UK. If more firms step up to the plate and train, we can help bridge this gap, and be on course to deliver the homes and projects desperately required.”