Salix Homes leads the way in compulsory micro-chipping for dogs 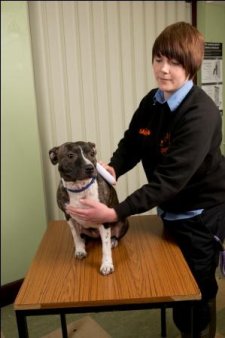 A social housing provider has become one of the first in the country to introduce compulsory micro-chipping for dogs owned by its tenants living in high rise blocks.

The aim of the scheme is to build up a database of animals living in Salix Homes’ properties and in turn this will help tackle lost, stray and abandoned dogs and crack down on pet related nuisance and anti-social behaviour, such as dog attacks or dogs used for fighting or intimidation.

The move comes after a serious dog attack in Ordsall this week when two dogs wandering the streets - one of which was a pitbull-type breed - attacked a pensioner and killed her beloved Yorkshire terrier.

The scheme has been launched at Fitzwarren Court in Pendleton where pet owners were given the opportunity to register their animals and representatives from Manchester Dogs Home carried out the simple, micro-chipping procedure.

Earlier this year the Government announced every dog in England will have to be micro-chipped by April 2016 in a bid to deal with the growing number of strays.

Joe Willis, chief executive at Salix Homes said: “We are proud to be leading the way with our new pet policy and micro-chipping initiative and hope that other housing providers will follow our lead and join us in promoting animal welfare and clamping down on animal-related anti-social behaviour.

“Under new Government legislation every dog will have to be micro-chipped by 2016 any way, but we wanted to get the ball rolling early in Salford where stray dogs are becoming an increasing problem.

“Just this week we have heard about the horrific incident involving a pensioner from Ordsall who was attacked while out walking her own dog, which was tragically killed by two dogs roaming the streets. We hope that our scheme will help reduce these sorts of incidents by encouraging people to become more responsible dog owners and it will also ensure that the authorities will be able to trace the dog owners and deal with them accordingly.

“The more dogs we have registered on our central database the more successful this scheme will be.  We know that the majority of dog owners are responsible, but this will help us deal with those few who are not. As well as helping to reduce anti-social behaviour and pet nuisance this scheme will also give pet owners peace of mind that, should their animal be lost, it can be easily traced and reunited with its owner.

“We are delighted to be working alongside Manchester Dogs’ Home and I would remind tenants living in blocks who currently own dogs to ensure they register their pet and take advantage of the free micro-chipping we are offering. However this scheme is strictly for tenants with existing pets and new pets are not allowed in our high rise and low rise blocks.”

Every year Manchester Dogs Home takes in around 5,000 stray dogs, with just 35 per cent being reunited with their owners. The rest are left in the care of the animal charity until they can be found a new home.

“Micro-chipping helps us to reunite more than 35% of the lost dogs that arrive in our care with their owners quickly and often on the same day the dog arrives.

“We are hoping that this scheme will help to encourage dog owners to be more responsible not only with their dogs but also towards the people around them.”

Free micro-chipping and pet register events will be held in the coming months at all of Salix Homes’ high rise blocks, which is expected to be completed by the end of 2014. The scheme will then be introduced at all Salix Homes’ low rise blocks and sheltered housing complexes.

Salix Homes staff have been trained how to use scanners and will scan dogs at the blocks to check they have been micro-chipped.  Tenants who do not have their dogs registered or micro-chipped will be considered to be in breach of their tenancy agreement and action will be taken. The policy applies to all tenants with existing pets; new pets are prohibited in all high rise and low rise blocks.
Micro-chipping is a simple and painless procedure where a microchip, which is the size of a grain of rice containing a unique identification code, is inserted under the skin at the back of the neck.