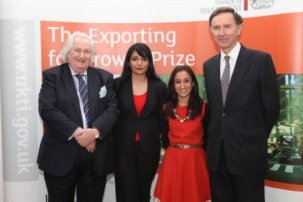 The winner was announced by Trade and Investment Minister Lord Green at an Export for Growth reception at One Marylebone, London.

Pavegen was awarded the prize in recognition of the export potential of its unique technology that generates electricity from footsteps, and was selected from ten regional finalists, after finishing ahead of 50 entrants from across London.

Pavegen is already developing export links to a number of new markets, and has projects forthcoming in Bulgaria, Spain, Greece and Australia, but will utilise the prize money to further advance its international ambitions.

Amee Devani, Pavegen’s Head of Development, said: "Winning this award is a tremendous boost for Pavegen as it comes at a critical time for our overseas growth and expansion, and the support from UKTI and sponsors HSBC and PwC has been extremely helpful as we strive to realise Pavegen’s massive export potential.

"At Pavegen we see ourselves following a long tradition of world class British design and innovation, and we’re confident that our technology can play its part in generating economic growth and new highly-skilled UK based jobs.”
Pavegen’s CEO, Laurence Kemball-Cook added: “Winning this award is yet another milestone in Pavegen’s development.”

Continued Laurence: “There’s been much talk of late about the need for the UK economy to rebalance with more emphasis placed on design and innovation. I hope that Pavegen can continue to contribute to this process.”

Parveen Thornhill, Regional Director for UKTI London, said:  “The standard of entries was incredibly high and the creativity and innovation of the ideas was fantastic.

“However Pavegen stood out due to its overall innovative approach and how it's already beginning to think about diversifying and developing different concepts.  The judges were impressed by Pavegen’s good understanding of the barriers to trade and overall help and support it knows it will need to help achieve its goal.  We are looking forward to working with them as UKTI is well placed to help them succeed.   Exporting is crucial for firms to sustain their business and grow which is why we urge all London companies to take advantage of the support and opportunities out there.”

The two runners up are Testplant based in the City of London, and Greenwich’s Integrated Trackers.  They will receive grants and support towards targeting international markets.

Lord Green, Minister for Trade & Investment, said: “The calibre of firms who have presented their ideas has been exceptional.  I give my congratulations to the winner, Pavegen, and two runners up and wish the other finalists the very best with their innovative export ideas.

“I hope that the event will encourage others to spread their wings and benefit from international trade, particularly in our Olympic year when the entire world will be watching the City.”

Pavegen’s triumph comes hot on the heels of a recent victory in the Lloyds TSB Enterprise awards, where CEO Laurence Kemball-Cook picked up the London regional award. Laurence hopes to add the national grand prize to a growing list of accolades for Pavegen later this month.