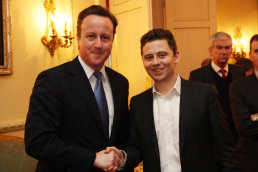 On Friday 10th February,Prime Minister David Cameron hosted a Breakfast Event at No. 10 Downing Street, providing an opportunity for investment angels and UK entrepreneurs to share their views on how to use the innovative drive and growth potential of the sector to kick-start our economy.

The event was attended by around 100 individuals invited by Lord Young (the government’s “enterprise tsar”), and included Pavegen System’s Chief Executive Laurence Kemball-Cook.

Pavegen is the creator and manufacturer of an innovative clean-tech energy-generating paving system that converts the kinetic energy of human movement into electricity in areas of high footfall.

Mr Kemball-Cook told the Prime Minister there were still significant barriers for companies such as his, trying to grow from small to a medium-sized businesses due to the lack of available bank and private funding and reasonably priced office space.

Said Mr Kemball-Cook: “I took the opportunity to highlight to the Prime Minister the many challenges that face a company such as Pavegen, as it progresses from a university start-up to a20-strong team based in London.

“In particular I wanted to know what was to be done to close the ‘equity gap’ for UK start-ups who struggle to access capital at key stages of growth. At Pavegen we had to invest large amounts of our own capital into the company before we even hit the radar screen of angel investors, and that really slowed up the development of our technology.

Laurence also highlighted that important steps had to be taken to help meet the high overheads that operating in the UK, and in particular, in London, poses.

Mr. Cameron admitted that this had been a historic weakness of the UK economy, and said that empty government buildings would be made available for small businesses at cheap rents to help alleviate the problem of property costs.

Mr. Kemball-Cook concluded: “I’ll be very interested to see what provisions are made in the forthcoming budget.”

Although the Budget is fewer than six weeks away, the Prime Minster said that he and the chancellor George Osborne were still open to suggestions of ways the government can encourage more start-ups.

Mr Cameron responded:  "The job (of writing the Budget) is never done. So if you have any proposals to help make this agenda really motor,give us those ideas."

Businesses have already gained some key tax breaks and support measures from the coalition government in last year's Budget and autumn statement, including the Seed Enterprise Investment Scheme (SEIS), which will, starting from April, allow anyone who invests up to£100,000 in a new business to claim back income tax relief equal to 50 per cent of the amount invested.

Moreover, there will be a capital gains tax holiday for investors who sell an asset during the 2012-13 financial year, as long as they reinvest the proceeds in an SEIS-eligible start-up in the same year.