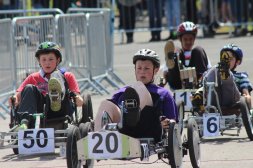 Once they had the green light, budding pedal car racers, aged eight to 18, competed in 100 heats to see a champion crowned Grand Prix winner.

The National Scout Car Races, now in its 75th year, is the culmination of 12 months’ preparation as young Scouts from across the country build the cars themselves from scrap metal.

Gary Hollingsworth, Group Scout Leader of the 105th Manchester St Peters Scout Group, said: “This is the main event in the Scout calendar, hundreds of participants came from across the country in search of fame and glory.

“The boys and girls all build their own cars and spend months making sure they are race-worthy – it’s a feat of engineering that takes a year to complete for just a few minutes in the spotlight, but it is well worth it.

“It was great to be able to hold this year’s event at Hexagon Tower, which is well-known for producing high-tech products and pioneering state-of-the-art science – just like the Scouts have in their own way with these cars.

“It’s really important for us that businesses, like Hexagon Tower, loan us facilities and sponsor the activities. Without these kind-hearted gestures we wouldn’t be able to hold the races.”

Scouts came from far and wide to take part in the event with young racers hailing from as far away as Llanelli to compete.

The 105th Manchester St Peters Scout Group organised the event and came out on top scooping more than 20 awards.

The Blackley team were on home turf as the races took place less than a mile away from their base at the Co-operative Academy.

Chris Mitchell, Associate Director of La Salle Investment Management, which manages the tower, said: “We were over the moon when the Scouts approached us to use the car park.

“Here at Hexagon Tower we develop high-tech resins, test pharmaceuticals from across the world and create disruptive technology – many of our tenants spend their days making complex ideas come to life, just like the Scouts who built these cars.

“They may have a scientist or two in their ranks looking at the amazing machines they created from what other people would consider scrap.”

The National Scout Car Races will be held in Blackpool in July next year, with the group hoping to return to Manchester in 2018.

The Blackley team is not resting on its laurels as it prepares for Darwen Grand Prix, on Sunday, July 13.

Those wishing to join the 105th Manchester a Scout Group, which meets on Wednesdays, Thursdays and Fridays, should call 07970885394 or email gary.hollingsworth@btinternet.com for more details.