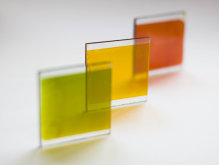 OPV develops solid-state dye sensitized solar cells for the Building Integrated Photovoltaic (BIPV) sector, and this investment round allows OPV to build on its highly experienced commercial team and scale up its ‘demonstrator’ product manufacturing.

The financing was led by MTI through the UMIP Premier Fund (UPF) alongside investment from Parkwalk EIS Technology Fund 1, the World Gold Council and a number of Angel investors.

Kevin Arthur, CEO of OPV, said: “It’s very exciting to have the opportunity to demonstrate the unique aesthetic benefits of our transparent glass based screen printable photovoltaic technology, and its inherent simplicity of production and low manufacturing cost. We believe that this technology has the potential to deliver a paradigm-shift in the way that solar energy solutions are deployed in the future.

“We are delighted to have closed this investment round and appreciate our investors’ confidence in the founding team and our technology. In particular MTI has been a strong lead in the process and its involvement during the due diligence activities has helped further shape the strategy for the business.”

David Ward, Managing Partner and Head of Cleantech investing at MTI, added: "We’ve been analyzing the Photovoltaics sector for some considerable time but had yet to get comfortable with either big plays in generation that are at the whim of Governmental subsidy, or organic PV companies that continue to have headwinds in terms of a path to commercially viable flexible electronics manufacturing. OPV is unusual in that it pairs world class science with a founder team that is very focused on execution and growing the business in a pragmatic way that gives the best chance of commercial success."

David concludes: "At MTI we are always looking to make investments in strong University spin-out companies, such as OPV, and are delighted to have sourced and concluded our second recent deal through ISIS Innovations.”

Kevin concludes: “David Ward’s extensive experience in early stage company operations will complement the Board’s skill set going forward and I am also delighted to be working again with Paul Vickery, who has been appointed Chairman of the Board.”