Landlord calls for better links between health and housing 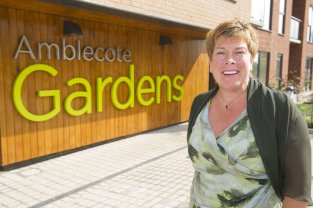 A housing association is calling for radical changes to how homes are provided to elderly and vulnerable people living in the UK, following the release of a report by think tank the Institute of Public Policy Research (IPPR) North.

City West Housing Trust, which funded the research, says the current supply of housing for older people is insufficient and often out of touch with the needs of residents, preventing people from remaining in their homes and communities.

The North West–based landlord is urging the government to lead a national debate on the issue of housing for older people – while developing a long-term strategy that bridges the gap between health and housing service.

“We are walking blindfolded off the edge of a cliff when it comes to the current system for housing older and vulnerable people in this country,” said Colette McKune, Deputy Chief Executive at City West Housing Trust.

“We simply cannot meet the needs of an ageing population with the homes we have, yet there is a severe lack of leadership when it comes to addressing the problem.”

The report argues that older residents are being forced out of their homes and communities and into institutional care because the nation’s housing stock is unable to meet their needs – with 95% of homes not fully accessible for older people. However, City West believes that more collaboration between health and housing services could go some way to tackling the problem.

Colette added: “Poor housing costs the NHS around £1.3 billion each year, yet there remains a huge disconnect between health and housing services in large parts of the country.

“It means we have thousands of people sat in hospital beds or care facilities – at great expense to the tax payer and causing untold distress to patients and their families – when some collaborative working could allow them to be treated at home or, better still, prevent them from becoming ill in the first place.

“The housing sector wants to open a dialogue with health professionals, but at the moment there is a communications barrier. We need to be much clearer in demonstrating how improving homes benefits the health service.”

Recommendations from the report include improving building standards and introducing new incentives to ensure that future homes can better support independent living.

“We are now paying the price for a lack of long-term thinking in previous rounds of house building,” said Colette. “We’ve been left with homes that in many cases cannot support us into old age.

“Bigger and better properties supplemented with a high quality support offer from both health and housing professionals will mean that people can live longer in their own homes.

“However, we are also facing a major housing shortage, and commitments to house building will no doubt feature prominently throughout the upcoming election campaign. We need to strike a balance between quality and quantity, to ensure that our children and grandchildren do not find themselves facing the same problem.”

While City West believes that a commitment to building higher quality homes can contribute to a long-term solution, the landlord is calling for a national debate on how we can deliver housing schemes that can prove an attractive proposition to older residents.

City West spent a number of years developing its own care home offer which is based on the principals of ‘intentional communities’ and is designed to ensure that facilities for older and vulnerable people remain at the heart of neighbourhoods.

“While there are examples of good practice across the market, at present nobody has all the answers about how to tackle this problem, which is why we decided to fund this report with IPPR,” added Colette.

“When you consider the current housing offer for older residents, you can understand why people want to remain in their own home, even if it might not be suitable or accessible.

“There is a stigma attached to many residential care facilities and lots of residents feel the homes available do not meet their needs.

“There will always be a need for supported housing but the image surrounding the offer needs to change, and that will only come if we secure buy-in from the public and build desirable homes in places they want to live.

“We need to change the national attitude to older people’s housing in the same way we have changed our views on pensions. For previous generations the challenge was to encourage people to take control of their financial future as they entered old age, but for current generations we must encourage them to think about where they will want to live later in life.”

Colette believes that cohousing developments steered by local people could provide a catalyst for more developments that older people are happy to move in to.

She said: “By ‘upskilling’ residents in areas such as design and planning we can allow them to become more involved in the process of developing homes and communities where they are happy to live later in life.”

Along with long-term reforms the report also outlined a number of potential options for supporting people who want to remain in their own properties in the short-term, including a shake-up of the Disabled Facilities Grant system to ensure that funding for adaptations is available to those in the most need.

For every £1 City West spends on adapting a person’s home the landlord saves £7.50 for the NHS and social services budgets – meaning it has already saved £61 million for vital health care services in the past six years by helping 1,209 people stay in their own properties.

“There is a huge amount that we can be doing in the short-term to keep people out of hospital beds and in their own homes for longer,” said Colette.

“There are systems in place for adaptations, but they can be cumbersome and we often hear stories of families having to repeat their stories to several different agencies.

“We need to speed up the process to make sure interventions happen at an earlier stage and that those in the most need are seen first. When you take into account the fact that falls at home make up 40% of all ambulance call outs for people over 65, and that hip replacements cost the NHS £2 billion per year, it is staggering to think that we could have a situation when a resident is waiting weeks for a handrail to be fitted – even if it has been highlighted by health professionals that they are at risk.”

To tackle the problem locally, City West is launching a health passport pilot in its communities which will see each new tenant receive a bespoke health plan.

“But we are not alone in coming up with initiatives like this. We’ve heard of some excellent regional schemes and pilots up and down the country that are having a genuine impact on health outcomes.

“The challenge now is to share this good practice so we can turn local ideas into national programmes, and give health and housing professionals a better understanding of successful collaborations. For that to happen we need national leadership on the issue.”