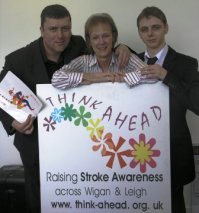 Wigan based comedian Jimmy O has re-united his band Clownprince to produce a one off single entitled ‘Cradle Me’, released on May 3rd, with all the proceeds from the single’s sales going to local charity Think Ahead Community Stroke Group.

Jimmy O – who made a name for himself both online and in numerous television appearances as The Wigan Joker – has written the single to help Think Ahead Stroke Group raise awareness of the issues surrounding Stroke and its impact on both individuals and families.

Jimmy became aware of the devastating effects of Stroke when his own mother passed away two years ago; leaving a void in his life which is reflected in the lyrics of Clownprince’s latest single. The song’s release date would have been his mother Dorothy Hewitt’s 72nd birthday.

The song itself focuses on themes of vulnerability and the need to have someone out there who can look after you; issues felt keenly by Stroke Survivors and anyone who has witnessed the effects of a Stroke.

Jimmy has done regular stand up comedy for charity during the course of his five year career in show business, including a tribute night to his mother, yet this is his first time writing and releasing music for charity.

The release of ‘Cradle Me’ coincides with Think Ahead’s ‘Raising Awareness Week’, where the Wigan based charity will inform the local community of the dangers of Stroke, and to promote the importance of maintaining a healthy lifestyle. Think Ahead will visit Wigan, Ashton and Leigh in the ‘Feel Well Truck’ alongside NHS nurses, Health Trainers, Smoking Cessation and Wigan Leisure Trust’s Active Living Team, offering free blood pressure testing and promoting healthy lifestyle choices.

Comedian and musician Jimmy O said: “I just want to do some good and generate some cash for Think Ahead Stroke Group – so I brought back Clownprince to do just that. The problem is that people don’t understand just how dangerous Strokes are and how they affect people in the long term.

“The song is about feeling vulnerable, and how you need someone there to look out for you; that’s how survivors feel after a Stroke – and that’s why it’s so important to have a charity like Think Ahead that can re-connect them to the community and the things they love.”

Carol Sankey, Executive Manger at Think Ahead Community Stroke Group, said: “We at Think Ahead would like to say a big thank you to Jimmy O and Clownprince. We urge people to pick up a copy of the single, as each sale will enable us to help more Stroke Survivors and their carers in the local community.”

Carol continues: “The song will hopefully raise a lot of awareness of the dangers of Stroke in people of all ages. We hope to further this by touring the ‘Feel Well’ truck across the local communities of Wigan, Ashton and Leigh during our ‘Raising Awareness Week’ starting on May 7th.”

Clownprince’s single ‘Cradle Me’ is released on May 3rd and is priced at 99 pence, available to download from iTunes, Amazon and all good online distributors. For more information about Clownprince or the single; please search for ‘Clownprince’ on Facebook, or alternatively follow @ClownprinceHQ on Twitter.