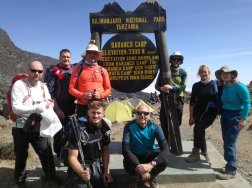 A team of intrepid work colleagues has scaled one of the world’s highest mountains for charity.

Derek Walsh and Vanessa Barlow, Steve Cullen, Sam Peet, and Glyn Thompson, who work at Bolton-based builder and developer Seddon, completed a gruelling 50-mile trek up Mount Kilimanjaro in Tanzania, Africa, on October 13 in aid of celebrated Manchester cancer hospital The Christie.
The group was joined by friends Tony Valentine, Alan Whiting and Michelle Webster, and members of The Christie, for the expedition to the 5,895-metre summit of the dormant volcano to raise money for research into proton beam therapy (PBT) at the charity.
Former cancer patient Derek, who was treated by The Christie for 10 years, said the team was “ecstatic” to reach the peak of the world’s fourth largest mountain.
“It was an amazing feeling to reach the top,” he said. “It was incredibly difficult and we were all exhausted by the end, but we were ecstatic to have made it.”
The fundraiser was part of a pledge to raise money for the charity after it was selected as Seddon’s ‘Charity of Choice’, which runs until 2019.
Vanessa added: “Climbing Kilimanjaro was an experience of a lifetime. It was certainly a challenge. The one thought that kept me focused was no matter how tough I was finding the physical climb, the feeling was nothing in comparison to the challenges faced by people with cancer facing each day with their own personal climbs.
“It was a privilege to undertake such a challenge in support of the incredible work done at The Christie every day.”
Since last year, Seddon has completed a number of events for the charity, including the London Marathon, the National Three Peaks Challenge and fire walking, as part of the company’s campaign to raise £1 million for The Christie.
Seddon has been raising money for The Christie since 1997 when it provided the hospital with two operating theatres. In 2009 and 2010, Seddon raised more than £350,000 by running, cycling, swimming and walking hundreds of miles in fundraising events.
PBT is a specialist form of radiotherapy that targets cancers very precisely, increasing success rates and reducing side-effects. It targets tumours with less damage to surrounding healthy tissue and is particularly appropriate for certain cancers in children who are at risk of lasting damage to organs that are still growing.
Danielle Carney, corporate fundraising manager at The Christie, said: “Seddon is doing an amazing job as one of our key partner charities and this latest challenge was really impressive.  We’re very grateful for their ongoing support.
“It’s because of organisations like Seddon that facilities such as the proton beam therapy research room become a reality, helping to bring the latest cutting edge treatments to cancer patients.”