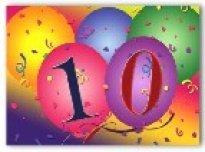 Local stroke awareness and support charity Think Ahead Stroke Group, is marking being ten years old on Thursday 16th September with an afternoon of celebrations.

The ‘birthday bash’, to be held St Peters Pavilion, Hindley, will be attended by Think Ahead members from across the years along with local dignitaries, including the Mayor of Wigan. There will be speeches, red, white and blue themed decorations, birthday cakes kindly donated by Greenhalgh’s Bakery and friend of Think Ahead, Irene Ince, along with a good old fashioned British sing-song.

Charity Chairman Mike Aspinall said: “This is a very special day for Think Ahead Stroke Group. Obviously it’s important to celebrate ten years as a very significant milestone for the charity; and we intend to do that with a proper celebration on our birthday, Thursday 16th September.”

Mike continues: “Today is an opportunity for Think Ahead to reflect on the past. To remember all the individuals Think Ahead has helped restore hope to over the years, and those who are unfortunately no longer with us.

“It’s also a time to consider how far we have come as a charity. We now have over 400 members across Wigan & Leigh and have become an established and well recognised part of the community.

Mike concludes: “Think Ahead is the current Mayor’s Charity, has link ups with a number of local sports teams and community groups and hosts a major annual charity challenge event in May each year. We’re helping more people than ever before – but we’re always striving to do more.”

Think Ahead began its life as a small support group of just a few members, but over the last 10 years has grown to a charity with over 400 members. Neville Andrews, aged 71, from Leigh, is one of the founding members of the group and is also the charity’s Treasurer, whilst Brian Hesketh, aged 64, from Wigan, joined the group in December 2009.

Neville said: “Think Ahead means so much to me, they are like family and I don’t know what I would have done without them over the years.

“In 2010 the group may be unrecognisable from what it looked like 10 years ago, however the basic idea is the same; Stroke Survivors and their Carers coming together to support each other and improve each other’s lives.”

Neville concludes: “I’d like to take this opportunity to thank Think Ahead for everything they’ve done for me and my family over the last 10 years, and of course wish them a very Happy Birthday!”

Brian said: “When I had the Stroke everything seemed so desolate and I was scared about the future, but then I found the group and I now have the benefit of a community of people who understand exactly what I’m going through and who provide me with the help and support I need.

“When I come to group meetings, take part in activities or go on organised trips, I no longer feel like a stroke survivor, I feel like a regular person, and that means so much to me.”

Brian concludes: “Happy 10th Birthday, and thank you so much Think Ahead Stroke Group!”

In the run up to Think Ahead’s birthday celebrations an online ‘Birthday Guest Book’ has been created on the Think Ahead website, where members, friends and family of the charity and anyone can leave a birthday greeting for the charity. If you would like to have a look or make a contribution, please visit http://www.think-ahead.org.uk/AboutUs/GuestBook.aspx.

Think Ahead Stroke Group has this year been named as an official Mayor’s Charity for 2010/11, if you would like to help a local charity which strives to help local people, then a donation can be made to "Mayor’s Charity Appeal" and forwarded to the Mayoral Secretary at Wigan Council, Town Hall, Library Street, Wigan, WN1 1YN, or call 01942 404 149.