A female apprentice from Salford campaigning for more women to take up careers in construction has been given a top award for her work.

The 20-year-old was inspired to become a painter and decorator after hearing about her mum’s battle to get into the industry and is now encouraging more women to look into construction careers.

Shelby became a strong advocate for women in construction after learning that her mum was ‘laughed out of the room’ when she applied for the same job more than two decades ago.

Her determination, positivity and professionalism ensured she was honoured at builder and developer Seddon’s third annual apprentice awards at Salford College.

The awards recognise apprentices who have gone above and beyond in their roles and the people who have helped them on their way.

“I’m really proud that I’ve been able to fulfil my dream and become the first woman to win the award – I didn’t know I was even nominated, which makes this extra special for me.

“Now I have completed my apprenticeship I am really excited to get stuck into my career with Seddon and work my way up to becoming one of the very few female forewomen working on site in the UK.”

Tony Costello, Training and Development Manager at Seddon, said: “Shelby is a rising star at Seddon, and is respected by everyone on site and in the classroom.

“She is a fantastic ambassador for the industry and is a credit to herself, her family and Seddon. I look forward to continuing to hear great things about Shelby in the future.”

Mitul Pankhania, 17, is a second year apprentice working on Seddon’s Arncliffe development in Halewood. Mitul said: “It’s a massive privilege to win – I didn’t even know I was shortlisted!

“I hope to prove this award true after I finish my apprenticeship and work my way up the company.”

Jake Horoszczak, 22, is in the third year of his apprenticeship and works on Seddon’s Hindley Town Yard scheme in Wigan. He said: “I feel really proud that I’ve been recognised by the Seddon team and my own peers for this award.

“Although I’ll soon be coming to the end of my course I hope to carry on learning and working my way up to site management.” 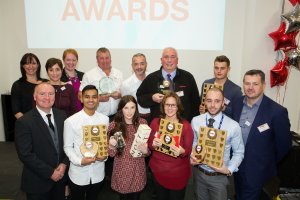 Tony Costello added: “Mitul and Jake are hardworking and dedicated and are great role models for all of our apprentices. They will go far with Seddon and it is a delight to have them on the team.

“This year’s entries are certainly going to be hard to beat, but I’m sure our apprentices will be able to rise to the challenge for next year’s awards.”

As well as honouring apprentices who have gone the extra mile, Seddon also presented an Inspiration Award to Health and Safety Officer Lynne Griffith and a Special Recognition Award to Project Manager Charlie Welsby for their work with apprentices on site.