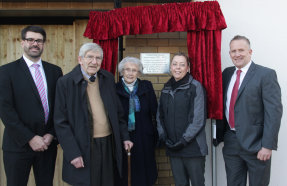 Organisations behind a new housing development in Audlem have unveiled a plaque dedicated to two of the village’s most cherished residents as they celebrate the completion of the scheme.

Builder and developer Seddon, which constructed 10 bungalows at Emberton Place on behalf of local affordable housing provider Wulvern, has paid tribute to Dr Gifford Thornton and his son Dr Michael Thornton, who tended to the medical needs of people living in the village for almost 70 years.

The new homes, which are for residents over the age of 55, have been built on the site of the former Thornton House sheltered accommodation which was opened in 1971 and was named in recognition of the doctors’ service to the village.

Emberton Place residents wanted to find a way to keep the Thornton name in the new development and proposed a commemorative plaque. 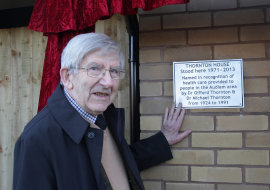 "I grew up in Audlem and worked in medical practice alongside my dad until he retired. I then carried on until retiring myself in 1991,” he said.

“We have lots of friends in the area, and I was very touched when the Emberton Place residents got together and suggested the Thornton name should remain in the new development, though Thornton House itself is no longer there. It is very humbling.”

Dr Thornton was accompanied at the unveiling by his wife, Margaret, who for many years cooked lunches at Thornton House for the village’s elderly people alongside other Women's Royal Voluntary Service volunteers.

“The new homes look fantastic, and both Seddon and Wulvern have done a great job,” said Dr Thornton.

“We hope the homes at Emberton Place serve the community as well as Doctors Gifford and Michael Thornton.

“Their dedication to the village and the medical needs of the people living in Audlem are to be highly commended and we hope that this small tribute to them will make sure their commitment is remembered for many years to come.” 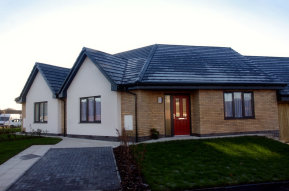 The new homes, a range of 10 one and two bedroom properties, boast landscaped gardens and spacious interiors.

Owned and managed by Wulvern, construction of the bungalows began in April and was completed in November ahead of schedule and within its £1 million budget - £152,000 of which was funded by the Homes and Communities Agency.

Seddon created three apprenticeships during the delivery of the homes.

“These stunning properties have been designed to mature with their residents.  Everything from taps to light switches have been fitted to accommodate changes that later life can bring.”