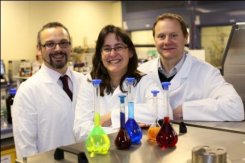 Manchester based Colour Synthesis Solutions (CSS) has announced it has secured a major grant as part of a three way international renewable energy collaboration.

Over the next three years, the rapidly growing chemical solutions provider, based in Hexagon Tower (a specialist chemical and bio-tech science park in Blackley, North Manchester), will receive £600,000 through the Technology Strategy Board (TSB) to fund their advanced solar cell research and development.

It is hoped that the new cells developed by the three way project, named COBRA, will allow for more efficient solar energy generation in lower light areas – making solar a more realistic alternative to fossil fuels across the planet, particularly for the developing world where the relatively high cost of silicon cells still proves prohibitive.

There is even the potential for DSC solar cells to be used effectively indoors.

The project marks a major milestone for CSS – which started only six years ago as a two man spin-out from the University of Manchester.  The company has now grown to nine chemists, with the potential for further rapid growth over the coming years.

Project Leader Anthony Lawrence explains: “Although Colour Synthesis Solutions has already a track record of working with some of the world’s biggest chemical companies, COBRA marks a very exciting new move into renewable energy for CSS.  The global solar market is worth an estimated £100 Billion – with DSC cells having the potential to be a real game changer.

“I’m proud to say that CSS was Merck and 3G Solar’s first choice partner for this project – which is testament to the huge strides we’ve made as a company over recent years.”

Dr Lawrence concludes: “CSS will provide the chemistry expertise into the design and synthesis of new, high efficiency sensitizer dyes, to be trialled in the DSC technology. Once a successful dye candidate has been identified, CSS will then manufacture the dye in quantities suitable for the production of prototypes and large area modules.”

CSS’s success is a welcome boost to the North West chemicals sector following the recent news that AstraZeneca plans to close its research and development site at Alderley Park, Cheshire – relocating the facility to Cambridgeshire.

Stewart Needham, Facilities Manager at Hexagon Tower, comments: “After recent bad news in the sector, it’s easy to ignore these smaller success stories – but at Hexagon Tower we’re surrounded by a thriving community of high-tech, high-value companies who make a positive choice to locate in the North West.

“CSS is another shining example of a company, spawned in the region’s world class universities, displaying innovation and enormous commercial promise – and we’ll continue to offer flexible support to CSS as they seek to expand over the coming years.”

As well as COBRA, CSS has delivered solutions to some of the world’s leading chemical manufacturers – including Henkel, P&G and Unilever.