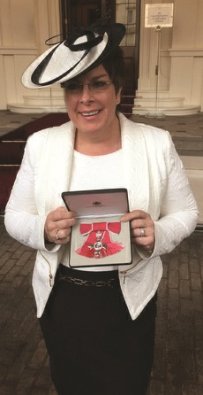 Lifelong Liverpool resident Colette McKune has been awarded an MBE by the Queen for her services to housing and the community.

Colette, the Group Deputy Chief Executive at the ForViva group, was presented with her MBE at an investiture held at Buckingham Palace on Friday December 18.

The award recognises her years of tireless campaigning that has seen her improve the lives of thousands of people through creating job opportunities, supporting young people and unlocking millions of pounds worth of investment to improve homes and communities across the North West.

Colette said: “I have been fortunate in being able to carve out a career that has enabled me to have a positive impact on people’s lives.

“I’ve been lucky to always have a great team around me, enabling me to attract and deliver investment and improvements that make a real difference.”

As one of the North West’s most respected housing professionals, she has overseen a £235 million investment to transform thousands of homes across region, and millions of pounds more to build much needed affordable homes.

A keen advocate for creating job opportunities, she spearheaded the creation of 550 jobs in Merseyside during her time with construction procurement firm Fusion 21 and has helped to create a further 350 jobs during her time at ForViva.

After twelve years working for Merseyside Police, Colette entered the housing sector in 2001, working for a national homeless charity.

She then became Managing Director at Fusion 21 in 2005, before joining social landlord City West Housing Trust three years later in 2008 as Director of Asset Management.

Tim Doyle, Group Chief Executive at ForViva, said: “Colette’s boundless enthusiasm and dedication to generating social value, along with her leadership skills, has made her not only a valuable asset to ForViva, but to the housing sector as a whole.

“She is committed to achieving excellence in all she does, which when combined with her vision to improve the lives of thousands across the North West, makes her an inspiration for many.”