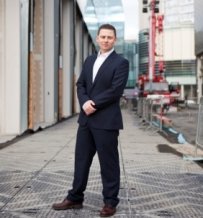 Laurence, who has developed Pavegen from a one man start up in 2010 to a multi-award winning cleantech SME with global export aspirations, feels the time is right to ensure entrepreneurs receive the financial support required to accelerate business growth.

Laurence said: “The inability of entrepreneurs and small businesses to access appropriate finance has been a big concern of mine since I experienced the challenge firsthand.

“Just trying to find the relatively modest amounts of cash required to get Pavegen off the ground proved to be a very frustrating experience and really delayed things. Everyone I spoke to knew it was a great idea, but nobody was willing to back a concept at such an early stage, resulting in me having to scrape together enough money from my family to get things started.”

Laurence continues: “It’s this very early stage where the government could make a real difference – because it was only when we finally got off and running that things started to move on very quickly for Pavegen.”

This is confirmed by Anthony Clarke, Chairman of BBAA and the Managing Director of London Business Angels (part of Angel Capital Group), who’s network invested £210k into Pavegen: “We were able to help Laurence understand the needs of angel investors and he soon became a very polished performer, to the extent that he managed to set a new record for the speed in which a round of investment was closed – just three weeks!

“The technology and business model clearly demonstrated tremendous potential, and that would suggest that perhaps more could be done to support ventures such as Pavegen at an earlier stage.”

Anthony continues: “That said, although I understand Laurence’s frustrations, I would point out that there is currently no better place in Europe than the UK to be a start up.

“The SEIS Starting in April this will allow anyone who invests up to £100,000 in a new business to claim back income tax relief equal to 50% of the amount invested as well as one off capital gains tax reliefs. All of this means that it has never been more attractive to invest money in fledgling but potentially high growth business in the UK.”

The 2012-2013 financial year will also see a capital gains tax holiday for investors who sell an asset, as long as they reinvest the proceeds in an SEIS-eligible start-up in the same year.

That said even Prime Minister David Cameron admitted to Laurence that more could be done in this area at an event for entrepreneurs and investors last month, hosted by No. 10 Downing Street and organised by the government’s “enterprise tsar” Lord Young.

Laurence explains: “I simply highlighted to the Prime Minister that there were still significant barriers for companies such ours, trying to grow from small to a medium-sized businesses due to the lack of available bank and private funding and reasonably priced office space – particularly in London.

“In particular, I was keen to know what was to be done to close the ‘equity gap’ for UK start-ups who struggle to access capital at key stages of growth, and what further steps could be taken to help meet the high overheads and operating costs in the UK.”

Mr. Cameron admitted that this had been a historic weakness of the UK economy, and said that empty government buildings would be made available for small businesses at cheap rents to help alleviate the problem of property costs.

Mr Cameron responded:  "The job (of writing the Budget) is never done. So if you have any proposals to help make this agenda really motor, give us those ideas."

Laurence concludes: “On that basis I’ll be very interested to see what provisions are made in the forthcoming budget, because the time for growth is now.”

Pavegen is the inventor and developer of a unique clean energy solution that harvests and generates electricity from human footfall.  The company, based in central London, has been tipped for success and is set to become a major manufacturer and exporter over the coming years.

The company recently scooped the UK Trade & Investment Exporting for Growth Award, as well as the Lloyds TSB Enterprise Award for the London region, putting them in contention for the national grand prize later this month.