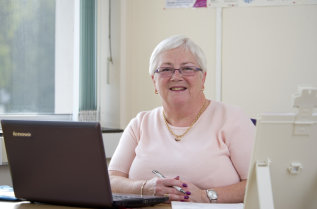 A Salford grandmother has made the move from unemployed pensioner to business owner thanks to a programme from City West Housing Trust aimed at helping people dreaming of setting up their own company.

Linda Ryan, 64, from Irlams o’th Height near Pendlebury, was made redundant from her job as a charity administrator in August 2014.

Determined that she was not ready for retirement, Linda responded to an advert promoting the City West Don’t Keep it Under Your Hat programme, and had soon decided to set up her own firm helping small charities, local churches and community groups to increase their donations.

Linda said: “I wasn’t ready to stop working – I still have the energy and drive to keep going – but I couldn’t get any help to find a new job because I was a pensioner.

“When I found the advert for the City West scheme, it was a ‘light bulb moment’ for me – I already have the skills I need to do my job, but with some extra training I knew I could make my own way.”

In September, Linda began working with City West’s commercial team to develop a business plan to help her fledgling company receive a grant, and to up-skill her in social media and marketing.

“The training I received was fantastic – the many complicated legal aspects to setting up a new business would have taken me forever to learn on my own, but the team managed to boil them right down.

“The team were always so full of ideas to help me get it off the ground, and it’s great to see the things we were discussing a couple of months ago come to life as my business.”

After working with the team for nearly two months, Linda successfully received a grant and has now launched her business.

“Receiving the grant – on my birthday, no less – marked a major milestone in my life and was a great way to end the course, but the work has only just started.

“Just because I’m not a 20-something go-getter doesn’t mean I’m past it – in fact with all the skills I’ve acquired over my career, I’m in a far better place to be able to deliver real value and keep contributing to the local economy.

“Thanks to City West, I’ve been able to go out to charities and effectively communicate what I can do to help them – and a couple have already signed up off the back of these initial presentations.

“If anyone thinks they have the right stuff to go and work for themselves, then there isn’t a better place to start than by getting involved with the Don’t Keep It Under Your Hat programme.”

City West will continue to work with Linda over the coming year, as she launches and grows her enterprise.

The City West Don’t Keep It Under Your Hat programme is expanding its offer to anyone over the age of 50 who is looking for a new challenge to use their valuable skills to raise additional income after retirement or to set up a whole new venture.

Lisa Scully, Director of Business Transformation at City West, said: “Far from being over the hill, the over 50s represent a strong skilled workforce that makes a huge contribution to the local economy.

“If we can get the one million people over the age of 50 that are forced out of work every year back into employment, the UK economy will benefit to the tune of an extra £88 billion – so it is essential that we promote opportunities at the local level.

“Linda’s story is a prime example of how Don’t Keep It Under Your Hat can offer a way for the over 50s to get back into work on their own terms, help create a boost for the local economy and create employment opportunities in the future.”

To date, Don’t Keep It Under Your Hat has helped nearly 70 people to develop their business ideas, with ten people successfully obtaining a grant to get started.

If you are over the age of 50 and want to learn how you can use your skills to set up your own venture or provide additional income, please get in touch with City West’s Enterprise Team on 0161 605 7792 or by emailing enterprise@citywest.org.uk.

This story was first covered by ITV Granada Reports.

P-OLDER_BUSINESS from Granada Reports on Vimeo.