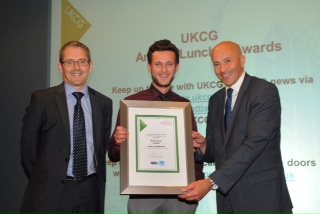 A budding Bolton construction worker has been recognised by an industry award as one of the best apprentices in the country.

Talented 20-year-old Daniel Holt came highly commended in the UK Contractors Group’s Apprentice of the Year Awards after impressing in his role as a bricklaying apprentice with builder and developer Seddon.

It is the second accolade for talent Daniel in 2014, after he represented both Bolton College and Seddon in the North West SkillBuild competition earlier this year. The event, which is managed by the Construction Industry Training Board (CITB), is the UK’s largest multi-trade competition for construction trainees and apprentices – allowing youngsters training for careers in the sector to put their skills to the test.

Competing against apprentices from across the region in the bricklaying heat, Daniel was awarded first place and will go on to the final at the NEC in November - and a chance to compete at the 2015 WorldSkills competition in Rio De Janeiro, Brazil.

Daniel, who lives in Smithills, is hoping these award wins will help him climb the career ladder as he continues his employment with Seddon. He hopes to become a Building Surveyor when he finishes his apprenticeship later this year.

Tony Costello, Training and Development Manager at Seddon, said: “This recognition is incredibly well deserved. Daniel has worked really hard, both on site and in the classroom, to learn the tricks of the trade and help others climb the career ladder.”

Currently studying for his NVQ Level 3 in bricklaying, Daniel was praised by the UK Contractors Group for his work with younger apprentices as they find their feet on site.

“We are delighted Daniel has been rewarded for his work and are behind him every step of the way as he moves into the next round of the SkillBuild competition,” added Tony.

Daniel joined Seddon in 2011 and has completed two stages of his NVQ at Bolton College, finishing his apprenticeship in July he is keen to continue his studies by undertaking a Higher National Certificate (HNC) in Construction.

Seddon is one of few large, national builders to retain a dedicated apprenticeship and training programme throughout the recent recession.  The company has taken on apprentices every year for the last 75 years.

Seddon employs more than 60 full-time apprentices and regularly receives 600 applications for each year’s intake, for a variety of roles – from bricklayers and joiners to office support.

Simon Nathan, Head of Policy at organisers UK Contractors Group, said: “The future of construction will be founded on the skills and talents of our people. Our apprentice winners have truly excelled in their chosen trade and are an inspiration to other young people considering a construction career.”