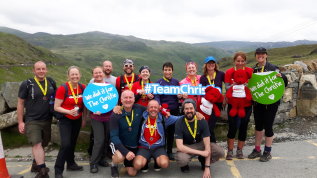 An intrepid team from builder and developer, Seddon, has conquered the National Three Peaks Challenge, raising more than £10,000 for The Christie charity.

The Christie charity’s fundraising team was at the finish line at the end of the gruelling expedition early on Sunday morning to congratulate the Seddon 60 at the foot of Snowdon.

Seddon named The Christie as its Charity of Choice for 2017 – 2019 and the Three Peaks Challenge is one of many national fundraising initiatives being undertaken in its support.

A longstanding partner of Seddon, The Christie charity provides enhanced services above and beyond what the NHS funds, supporting cancer care, research and education at specialist cancer centre, The Christie NHS Foundation Trust in Withington, Manchester.

Donations made on behalf of Seddon will go towards providing the centre with a national high energy proton beam therapy service in 2018 – one of only two in the UK.

Seddon has planned a year of fundraising events for The Christie charity, including a Kilimanjaro climb and fire walking.
Jonathan Seddon, chief executive at Seddon, said: “We’ve supported The Christie for a number years; it’s a fantastic cause that’s close to the hearts of the Seddon family and many of our staff.

“The National Three Peaks Challenge is absolutely exhausting – but knowing how much we’ve raised and the good it will do in helping provide state-of-the-art cancer treatment more than makes up for the blisters.”

Jennifer Bailey, The Christie charity’s fundraising coordinator, said: “Congratulations and many thanks to the intrepid Seddon 60 team on this superb feat. The money raised by such endeavours is vital for helping cancer patients and their families in the region.”

The builder and developer’s initial major support initiative was in 1997, when it provided The Christie charity with two operating theatres. In 2009 and 2010, Seddon raised over £350k by running, cycling, swimming and walking hundreds of miles in fundraising events.

The Seddon team will be taking on a Manchester to Blackpool bike ride in early July, to raise even more money for The Christie.