A great day was had by all at Think Ahead’s eighth annual Dragon Boat Race event, with returning team Simms Stars, from Liverpool based business services company HE Simm, taking the 2019 title. 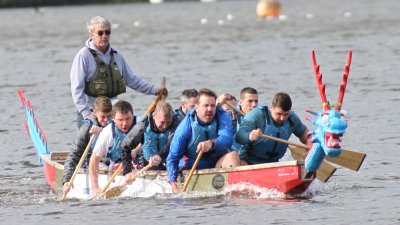 In total twelve teams from businesses and organisations across the region battled it out on Wigan’s Pennington Flash in two highly competitive rounds, with four teams making it through to the semi-finals.

The event promotes team building and networking amongst teammates whilst raising much needed funds for Think Ahead.

Lee Smith, Operations Manager from HE Simm, said: “We had a brilliant time at the Think Ahead Dragon Boat Race Day, and to win the whole thing was an added bonus!

“This is the second time we’ve attended the event and we always have a fantastic time. Not only is it great fun and for a really worthwhile cause, but it’s brilliant for team building as everyone has to work together in harmony when paddling the boat. We hope to be back next year to retain our title!”

Think Ahead’s Executive Manager Carol Sankey said: “A massive thank you to everyone who came to our annual Think Ahead Dragon Boat Race Day and made it such a huge success. This was our eighth event and it was the biggest and best yet.

“A huge congratulations to this year’s winning team Simms Stars who not only took this year’s title, but also set a course record that will take some beating.

“Special mention must be given to everyone who made the day possible, including all of our many volunteers, Leigh & Lowton Sailing Club, Crusaders Dragon Boat Club, Paul Kelly AKA DJ Funky Monkey, Co-op stores and Peter Cain’s Butchers.

“We love hosting the Dragon Boat Day, it is a great event with all the teams getting into the spirit of it and making it a really fun but competitive day.”

Carol concluded: “Believe it or not preparations are underway for next year’s event and we’ve had interest from a number of teams…so roll on 2020, it’s already shaping up to be a good one!”

If you would like to take part in the 2020 Think Ahead Dragon Boat Race Day then please email info@think-ahead.org.uk for more information.